After the Summer anthem “Cool For The Summer” (you read my review here), fans of the singer/songwriter/actress Demi Lovato have been waiting for her to take the next step and release her second single. In fact, Demi announced her fifth studio album “Confident” a few weeks ago with a hot album cover to go along perfectly with the name and theme of the album. Along with the album cover and the actual tracklist of the album, we also got the album pre-order on iTunes and other digital retailers. Scheduled for a release on October 16th, Confident is expected to show new (and old) sides of Demi Lovato. Not only in terms of her “confidence” but also based on the music itself, especially after she has worked with producers like Max Martin.

Well, the wait is over! Everyone can now officially get “Confident” (the song) along with the album pre-order on iTunes! Not only that, but Demi has officially announced that it will indeed be her second single and it’s being played on radio stations across the world as we speak. 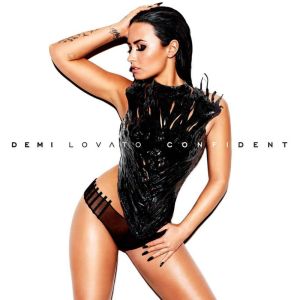 Confident was written by Max Martin along with Ilya Salmanzadeh, Savan Kotecha and Demi herself. The intro is possibly one of the best of any pop song released in the past few years. It starts out with a sassy horn arrangement, quickly picks up in pace after the addition of an upbeat drum set that reminds a lot of 2000-2010’s pop music or specifically something that Christina Aguilera would do. The background music is accompanied by claps and snaps, bringing this consistent element of tempo to the song. Confident is almost pure pop, but at the same time it really does not sound like any other pop songs that are out right now. Therefore, Confident is really accessible and it should be a song everyone likes to listen to when it comes on the radio. The verses are actually probably the strongest parts of the song besides the intro. “I used to hold my freak back, now I’m letting go, I make my own choice, b*tch I run the show”

The pre-chorus continues the same tempo but when the chorus kicks in, the song goes back a step to slow down the song a bit.  The chorus also features the one line the song represents the most,  “What’s wrong with being confident?”, being repeated over and over again until the song goes over to the next verse or the bridge. While singing this line there are also the snaps again in the background and after a while the horns come in again, before Confident goes back to the energetic drum-driven verse. This is definitely a weakness this song has though. It’s super catchy, but Confident does feel a bit too repetitive at times. It also follows a trend of “small choruses”, meaning other parts of the song (like the verses) can feel stronger than the actual chorus. In terms of how the song is built, i can definitely see a similarity to Tori Kelly’s Nobody Love and other Max Martin produced songs that have the same form. The song not having the chorus as a climax does feel weird sometimes, but at the same time the climax kind of gets dragged towards the last chorus where Demi brings it down with a big bang.

With Confident, Demi goes back to her own style of singing after doing something like Cool For The Summer that is partly out of her vocal comfort zone. Especially the last chorus is really impressive vocally, where Demi gets up to notes like A5 and possibly even an extremely short Bb5 belt. It’s going to be interesting to see how she is going to approach this song live. One thing is for sure, Demi is at her best right now vocally and with a song that is 100% fitting for her vocal comfort zone she’s definitely gonna be able to deliver some near perfect vocals with this. Even though “Confident” is not perfect, it’s probably the best single choice and an amazing introduction to her new “self” and her new album.

You can get the song on iTunes now!